Posted by Anna Bisso at 6:22 PM No comments:

Link to Art
Link to pictures
Link to Pictures
Anna is a native New Yorker, calling the city home for all of her 94 years. She grew up in Brownsville, Brooklyn with her sister and two brothers. Her father was the neighborhood fishmonger until "the Mafia cut off his supply." The family struggled after that and Anna was relieved when she was accepted into the Washington Irving School in Manhattan – the only school in the city which catered to children with artistic and musical talents at that time.
Anna quickly fell in love with all Manhattan had to offer and her creative spirit flourished. Although young women in the 1930s were afforded few opportunities outside of being a housewife or teacher, Anna had another plan. After graduating, she was determined to be an artist and did everything in her power to make her dream come to fruition.
Anna devoted much of her time to her own paintings, but also taught art to children. She and her other artist friends formed a tight-knit community. Even though they could barely make the rent on their dilapidated apartments – and certainly didn’t have the money for furniture – they felt truly “alive” in the constant exchange of ideas about art and the world around them. “When you’re an artist you just make friends,” she explains.
During this time, she met her first husband, a charming Italian-American man who loved to cook traditional Northern Italian dishes for Anna. They soon married and had two daughters. Anna took care of their children, while her husband worked as a truck driver putting in long hours at night. With her children asleep and her husband on the road, Anna would set up her easel in the kitchen and paint until the sun rose. Life was not always easy, but she was happy.
As fighting erupted overseas, Anna began work as a machinist at a war plant. Empowered by her new skill set, she felt a greater sense of independence. When World War II ended and soldiers returned to their jobs in America, she was forced out. “By that point, art was the only thing that made me happy and allowed me to express myself,” Anna recalls.
Anna began showing her work at a gallery in SoHo. She also tried to interest her children in art, bribing them with hot dogs and soda in exchange for visiting the Brooklyn Museum. She also encouraged them to be fearless. She insisted they learn how to swim since she had a lifelong fear of water herself. When her husband unexpectedly passed away, Anna was left alone to care for her young daughters.
One day, while visiting the library, she bumped into Sidney, an old acquaintance from her youth. A cameraman and lighting designer for a soap opera, he was also an avid photographer who had exhibited his work at local museums. Prompted by their shared interest, the two began a courtship which led to marriage in 1976.

With her children grown, the couple moved into an apartment in Manhattan and she maintained a separate studio in the building. In addition to her painting, she focused on efforts to promote other female artists, always reminding the women she met to fight for their independence. “You can’t live through your husband,” she advised. 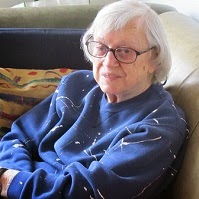 Posted by Anna Bisso at 3:52 PM No comments: